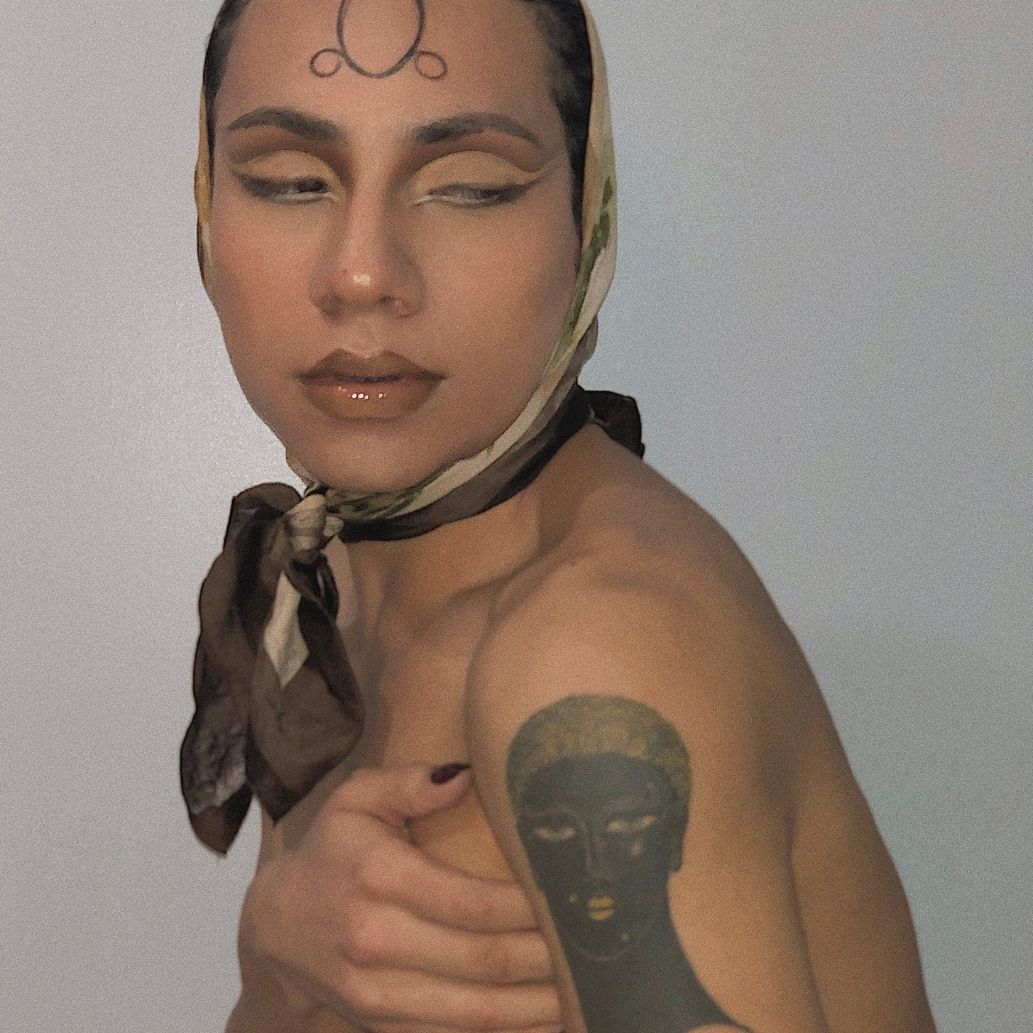 We spoke to Yasha Lelonek, a multifaceted creative with a passion and devotion for all things art, fashion, and beauty. They talked to us through their inspiration, experience in the fashion and beauty industries, how expression can lead to survival, and daily rituals to stay balanced and aware.

I was born in Queens, New York but I was raised in Atlanta, Georgia. I’m studying everything to do with arts and drama at NYU. I’ve been in and out of the theater since I was about 11-12 years old. I used to do musicals at a summer stock amphitheater in Mableton, Georgia. I gave it up when I was in high school to pursue academics. I did the International Baccalaureate Programme when I was in high school. It was so funny because I never really had any plans to do anything but the arts in my professional career but I have always had a real liking and talent for academics in schoolwork. My mom wanted me to do the program so that I would have a better chance of getting into a good school. I was one of the only ones in my entire class that wanted to pursue the arts. Everyone else wanted to be an engineer or a doctor. Growing up in that space definitely set me apart from a lot of my peers, in good ways and bad ways, but it did land me at NYU so I'm not complaining.

My biological mom is Colombian and my Dad is Black. I grew up with my father and my adoptive mother, who came into my life very early on. She is a Black woman. The culture I grew up in wasn’t Latinx-centered but more so Black-centered. It’s comparable in the sense that both of those brown cultures wanted me to have a stable living situation and placed a lot of value in the idea of job security. My parents made sure I knew that if I wanted to pursue arts, I would need to take it seriously. Even though they were hesitant when I decided to pursue arts, they were still really excited that I was going to get a college experience without the responsibility of taking care of children.  They didn’t get that because they had me and my sister at a young age. 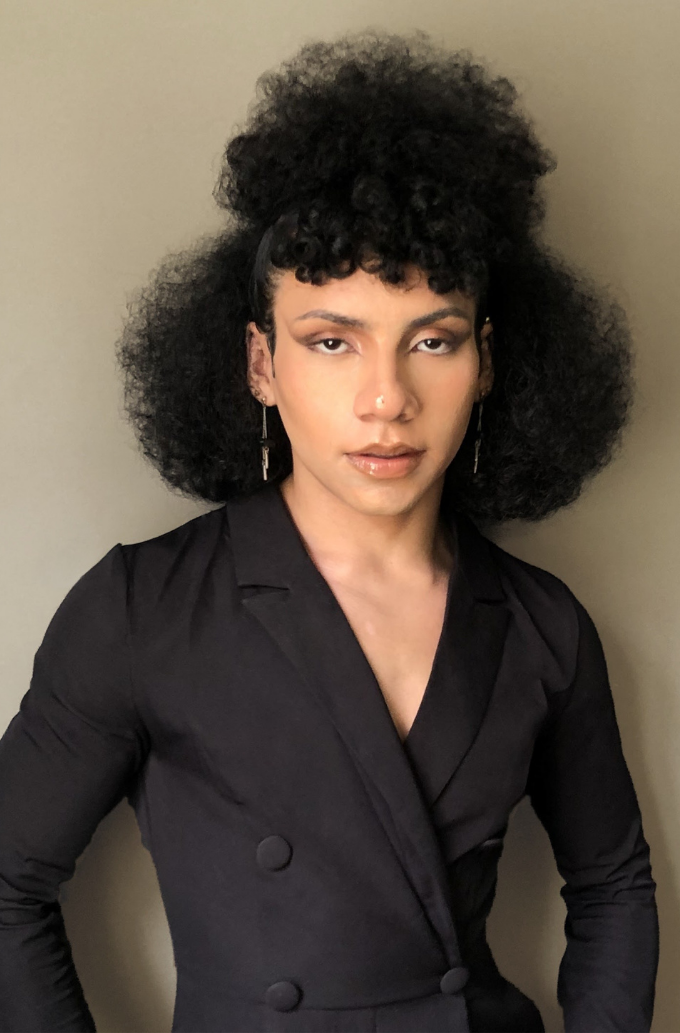 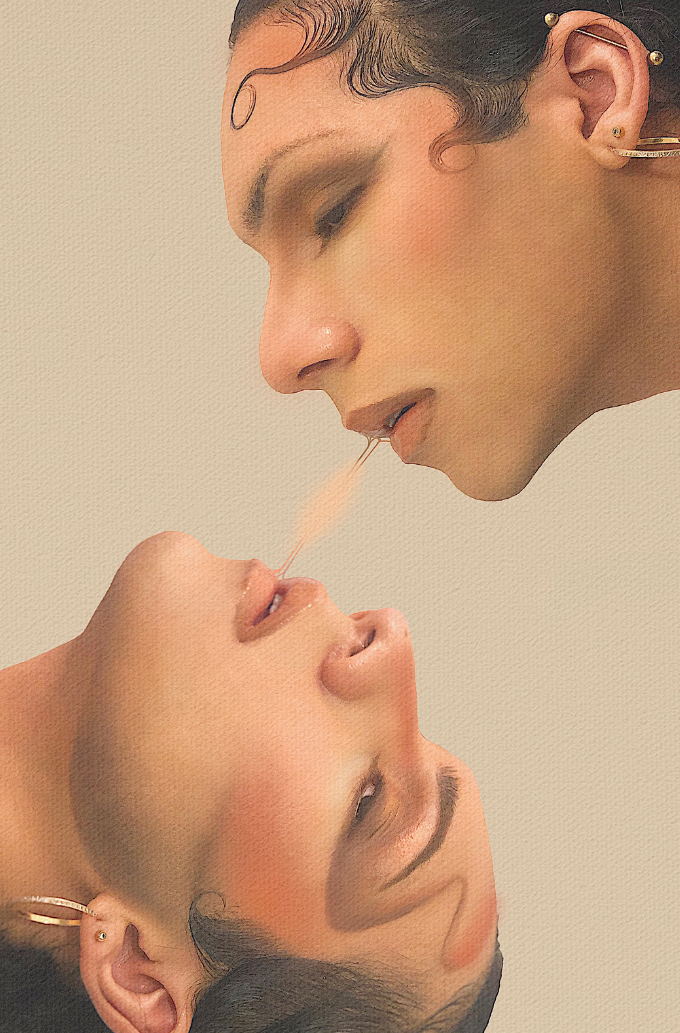 Drawn To Fashion, Beauty & The Arts

I am a Multimedia Visual and Performing Artist. More specifically I work in the realms of beauty, fashion and theatre. In the realm of theater, I act, write, direct, and design. I have worked in several shows as a costume designer, and I have done some scenic design work in that space. In fashion, I do artistry and styling. A real renaissance doll!

What drew me to this was this distinct kind of high femininity that motivated me to experiment with my gender identity and the way I expressed it. It started out with me experimenting with fashion in high school and stepping into different roles in theater. That allowed me to get my bearings and soon I realized I really loved expressing myself through forms of adornment, creating beauty, and applying it to my own body. I kept working at that through my various crafts and it developed from there. At the end of my high school career, I concentrated in visual arts. I developed a sense of color theory, composition, and line through painting in acrylics. I then applied that to makeup and that's how I developed my style in that regard. What drew me to all these different mediums is as a trans-feminine person and as a person of color, I always have this sneaking suspicion that life is fleeting. God forbid I drop dead tomorrow, I want whatever I do on this Earth to command space even if I’m not around to do it for them. I want things to have life beyond me and represent my community and everything that is beautiful about it. I’ve been attracted to forms of expression that have an immortal quality to them: photographs, film, writing, painting, things that have a very long lifespan. If those things are there, no one can ever deny I was here.

That was a completely new experience for me. Even though I’ve styled photoshoots before, I've never really worked with an established designer before. A little about Jackson Wiederhoeft: he’s a Parsons grad and he’s now coming into his own independent work. I've always admired designers, especially people like him who have their own distinct aesthetic and pay a lot of attention to the craft of making clothes, as well as selling them. I first saw his designs on the cover of Lil Kim’s album “9”, and I knew it was going to be an incredible experience. The theme behind it was of a queer chosen family and the holiday season. For those in my community that may not have relationships with their biological family, the holidays can be very isolating.

So we find family in the people who accept us for who we are. I went to Jackson’s studio in Brooklyn and I was completely blown away. His sense of aesthetics and artistry touched every single object that was in that space. When he showed me what I was going to wear, a gigantic yellow tulle overcoat, I almost cried. It was a sort of a holy experience to be able to wear somebody else’s art at that level. I was so incredibly grateful. That was also the first time I had my makeup done by someone else. As a makeup artist, it was a scary experience because I had to let go of control completely, but Slater Stanley turned it out.

On Working With Raveena

Raveena is such a gift. How I came into that job was, again, very community driven. My cousin Shereen Mohammad is an influencer/freelance model and she invited me to a Friendsgiving dinner in 2018 that was hosted by Reva Bhatt, a South Asian stylist who is absolutely amazing. About a year later, I met her again. I expressed my admiration for both her work and her ability to maintain space for marginalized communities. I expressed interest in assisting her on set and she mentioned that she was styling Raveena for a photoshoot the next day. So, at the end of last summer I assisted her in styling Raveena for Broccoli Magazine. I helped out on set and that was where I met Raveena and we clicked there. In December, Raveena messaged me on Instagram and said that she needed an assistant stylist for her new music video. I was running around in my dorm screaming. The rest is history. Working on that set was incredible. Raveena is the most sweet, gentle soul.

First and foremost, my biggest inspiration is black trans women. They’ve always been innovators -- for them, expression can mean survival. Getting to know the girls in real life and learning from their beauty routines has been so influential in the way I approach doing my own face and of course, when I’m with clients. Just like any art form, makeup can be frivolous, but there is a level at which makeup requires craftsmanship, especially if it is applied to your life as a way to affirm yourself. They taught me that. In terms of aesthetics, a big inspiration of mine is a painter by the name of Erté. He was a fashion illustrator and designer that created work very prolifically through the 20th century. He designed a vast amount of covers for Harper’s Bazaar in the 20’s and 30’s and went into designing costumes and sets for the french theater. After Art Deco fell into obscurity and had a renaissance in the 1980’s, he became a print maker. I discovered his work through Violet Chachki. I wanted to translate the precise, effortless way to be able to translate this quality into my makeup. It has such a polished finish that I love. In terms of people today working in fashion and beauty, I am very much inspired by Guo Pei, who is a Chinese couturier who made Rihanna’s big yellow gown at the 2015 Met Gala. Of course Pat McGrath and her work with Galliano for Dior. Lately, I’ve been referencing Raoul Alejandre’s work on actress Alexa Demie. For my personal style, I look up to Indya Moore, FKA twigs and my favorite Solange.

Trust your instincts. A lot of people, especially in New York, are talented with ambition and dreams. The beauty in it is that not everyone’s look is quite the same. That distinct quality that everyone brings into their work is what sets everyone apart from fellow artists. Don’t question yourself even if others do. Don't be afraid to take risks. You have seen the world as you've seen it up until this point, and it’s gotten you this far. Trust that.

Both morning and evening skincare routines are very important for me. It’s actually funny because I was not a skincare doll until about 3 months ago. I had a small routine, I would wash my face twice a day and moisturize, but I didn't do much more than that. Then I was wanting to look a bit more femme and they have nice glowy skin so I got my ducks in a row. I’m still learning!

In the morning, I wash my face with The Ordinary Squalane Cleanser and I shave if I need to (I shave pretty much every other day). After I shave, I wash my face again. I do a hyaluronic acid serum and then The Ordinary Vitamin C  because I get a little bit of hyper-pigmentation around my mouth. I finish with a Neutrogena Oil-Free moisturizer and a mineral sunscreen. At night, I wash my face and make sure I get all the makeup off throughout the day. I do another hyaluronic acid serum and some retinol cream to take care of any fine lines or signs of aging that may be happening. I want to nip those in the bud while I can. After the retinol cream, I seal it all in with a moisturizer and maybe a spritz of a face mist, I use the Fresh Rose Water. It’s just a little extra step for the days when you want to feel like you're in a skincare  commercial with water splashing on your face.

Breathing is my #1 tip. My acting training is conservatory style and we do breathing exercises all day everyday. It is an incredible way to manage nerves and stress. It creates a sense of immediacy within you. If you feel like you are unwell in terms of things being out of control, if you take a few moments to just breathe and be aware of the moment and the steps you need to take to help mitigate the problems you’re worrying about, it’s so helpful. I also think maintaining a work-life balance is essential. For the type of person I am, I love pouring myself into my work. But sometimes I will spend hours on a full face and I won't photograph it. I won’t do it because that time was for me. It doesn't need to be on social media. It’s just something that I enjoy doing and I let it pass. You don't have to be constantly putting out content for the consumption of everyone else. It is okay to do things for you.

What Would You Be If You Were A Cocktail